Wednesday night at Forfar Rotary gave the club another occasion to demonstrate their commitment to strengthen their ties with the youth. President Elect Bill Reid welcomed the recipients of two awardees and two members of staff, Rector Melvyn Lynch and from the PE department Anne Callander of Forfar Academy.

After grace and a meal the rest of the meeting was spent introducing Jack Millar and Lewis Pass from the New Forfar Campus. Lewis was first up to receive the Sports award and asked by President Elect Bill what he did to be recognised for the award and spoke briefly about he sporting credentials which oncluded cross country running aboth as participating and organising the training etc.

The theme then changed when Jack Millar when he was awarded the Technology prize and again when prompted by President Elect Bill discussed his progress and hoped this would continue in the future with at least another year at the Academy. Both were asked about the new Campus and were in agreement that the new facility was a great improvement on the old Academy offering a wider use to all pupils who wished to progress academically as well having new challenges ahead. Both awards came with a Trophy, a Framed Certificate and a monetary sum in a siutable brown envelope. 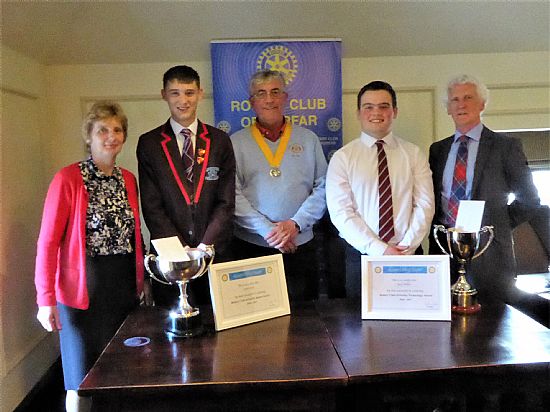 Mervyn Lynch thanked the Rotary Club for its support to the Academy and the importance in recognising endeavour and enthusiasm and by doing so, encourage others to higher their own expectations. He hoped for an even stronger relationship with the Rotary Club in the future and invited anyone from the club to a tour of the new Campus.