Helpers Rewarded and a Speaker Stoned.

On a very busy night at Forfar Rotary Club when representatives from the organisations who helped with the annual Santa Sleigh Collection were rewarded for their assistance. This event has grown in stature over the past years under the stewardship of Sandy Ogilvie and as such there are other groups who would want to be included. In these cases and in order to be fair, the club now has a standby list of organisations willing to help. Each night of the planned routes is undertaken four nights a week over a three week period and tries to reach as many streets as possible with few exceptions.

None of this would of course be possible without the support of the Forfar Public with their generous donations that Rotary provides a way to give, safe in the knowledge that 100% of the collection goes back to charity in various ways. President Paula thanked the groups for their support and praised Sandy for his organsation of the event for the past years.

Listed are the 12 organisations who helped with the Santa Sleigh Collection. They are all presented with a £300.00 cheque at the Rotary meeting of Wednesday, 25th Jan. 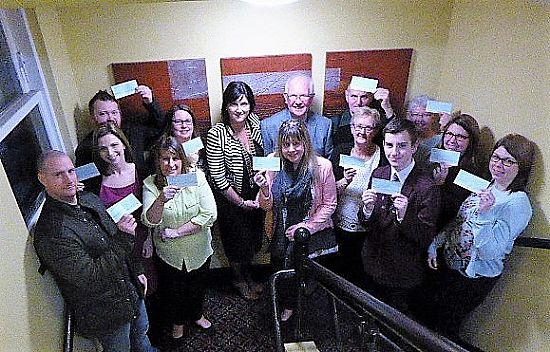 The guests were invited to stay on and hear the speaker fot the evening and they were not disappointed as Chalie Blair-Oliphant accompanied by his wife Gill gave a first class talk. Introduced by Rotarian Len Williamson, the subject was the Ardblair Stones. Charlie proceeded to inform us of his interest of stones with a history of which there are many in Scotland. Through his research of these stones and their place in history he decided to create his own stones. Anyone who has watched the Strongman Competition will have seen and heard about the Atlas Stones where stones are lifted and placed on top of a barrel. Charlie has developed these stones and there are nine in total all of different sizes and weight with the size not always indicative of the weight. Featured at the Blairgowrie Highland Games they are creating lots of interest and anyone “can have a go” at trying to lift the full set onto the barrels. Further information on the Ardblair Stones can be viewed on Facebook. Vote of Thanks was given by Rotarian Bill Reid. 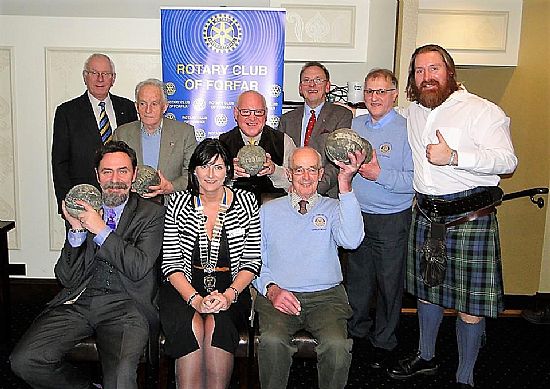