A BIG THANK YOU FROM FORFAR ROTARY

Santa has now gone away for a rest and has fulfilled his role with Forfar Rotary, now all that remains is his big day.

The huge undertaking by Forfar Rotary over the last three weeks was a monumental task carried out by club members who organised the whole programme from bringing Santa to the Cross and the switching on of the lights then followed a tour of Forfar's streets for four nights a week over three weeks and finally a stint at ASDA and Tesco on Saturday past.

This would not be possible without outside help and the club wish to thank the various group and clubs who helped on the nights round the town. They will have a financial reward to look forward to in January.

We are fortunate that even large companies such as ASDA and TESCO give us local support and they donated all the sweets and oranges distributed at the Cross as well allowing us to collect at both stores. Many Thanks to both companies.

Special Thanks to Rotarians Alan White and Sandy Ogilie, Alan for towing the Sleigh round the streets and for his superb skills in accessing some tight spots to take Santa to the children and to Sandy for his master planning and going out every night to make sure the evenings went as smoothly as possible. He contended with making sure of safety for the helpers by issuing Hi Vis Jackets, Passes of Authorisation and conducting the door to door collections. Then each night the collection had to be counted and witnessed in the presence of another Rotarian, again all done by Sandy.

However none of this would have been worthwhile and so to you, the good people of Forfar , we give a heartfelt huge THANK YOU. We have been bowled over by your generosity when times are hard you think of others by freely giving your donations. President Paula has vowed the money collected will be wisely distributed and put to good use. 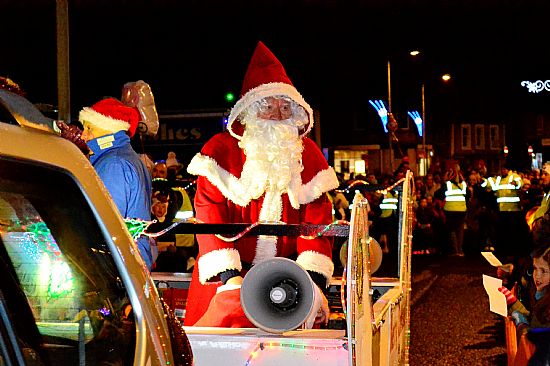