Forfar Rotary Club welcomed District Governor Michael Halley to what was to be a very busy night as they also welcomed representatives from the support groups assisting the Santa Sleigh's nightly trips around the town during December.

Forfar President Robin Wardhaugh welcomed everyone on behalf of the Club and after a short introduction a meal was served before the evenings programme took place.

Name of the Organisation and their Representative attending were

Each of the organisations was presented with a cheque for £250 as a thank you from the club and was looked upon as not only tidy sum for a nights assistance but just as importantly as a way of building relationships with others in the town. A good community spirit is needed in todays difficult economic times where voluntary work is the only way to keep services going for the forseeable future. Partnerships assisting in Rotary led initiatives, ultimately achieve this, bringing benefits for our varied support groups and their own efforts.

President Robin made special mention of the hard work and dedication of Rotarian Sandy Ogilvie who made all the prepartions as well as going out every night just to make sure everything went smoothly and he only failed once when “he let a storm occur” on one of the collection nights. However due to the popularity of the Rotary Clubs Facebook page this information was relayed and another night slotted in as soon as possible.

After the presentations were concluded the recipients took their leave before DG Michael gave his talk to the Club. Not one to labour any particular points his rallying call was well received by an attentative body of Rotarians. In an interesting way he gave “up to date thinking” on ways to keep Rotary to the forefront by being traditionalist in some ways but not afraid of change. Why? is often asked by newcomers or even visitors to a club as to the reason behind some decisions. Because we have always done it like that is not a reason. If it is needless or could be changed for the better then why not change it but sometimes it needs a fresh eye to ask the question.

Some Clubs are stuck in the past and need to change but in his talk he praised the Forfar Rotary, citing the integration of local support groups as the way forward where vounteering is not only done at club level but involves the community thereby cementing relationships. He concluded by wishing future success to the Club.

President Robin Wardhaugh gave the vote of thanks to DG Michael and his wife Wilma adding they would always have a warm welcome at Forfar Rotary. 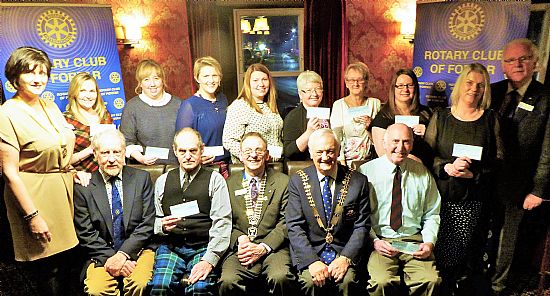