In a busy meeting at Forfar Rotary, President Robin Wardhaugh welcomed Logan Anderson from the Guide Dogs for the Blind. Logan is well known in the town and further afield in his role with the Guide Dogs. After the welcome Logan received a cheque from the club and he in turn spoke briefly to the members intimating he will shortly be retiring and so this would be one of his last tasks concerning the Guide Dogs. 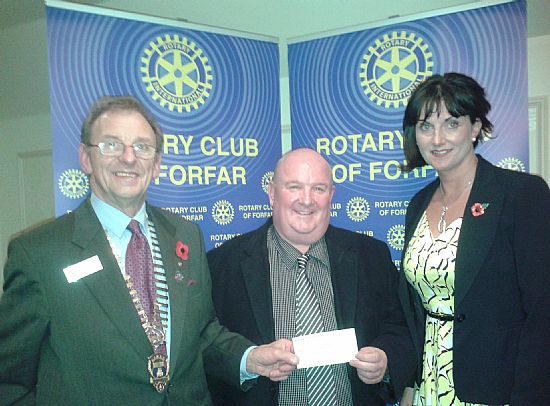 It was also President Robins pleasant duty to carry out his first induction when Peter Webster was inducted into the Rotary Club and the worldwide organisation that is Rotary International. Robin reminded fellow members of the club not to forget their role in giving their support and making Peter welcome.

A short history of Peter's life and career thus far.

Born in Manchester and grew up in Cheshire. He studied Applied Biochemistry at Brunel University.

Ran the Red Cross youth Group for 2 years in Wilmslow where I taught First aid and Nursing and also coordinated the first aid requirements for several events and concerts.

Ran a consultancy to the pharmaceutical industry before marrying a South African in 2007 and Moving to Cape Town.

Peter moved Back to the UK in 2014 and to Forfar in 2015-11-03 and is currently working for GSK in Montrose. Married with no Kids but does have two dogs (a dachshund and a Yorkshire terrier)

His final words “I'm going to stand outside, so if anyone asks, tell them I'm outstanding!” 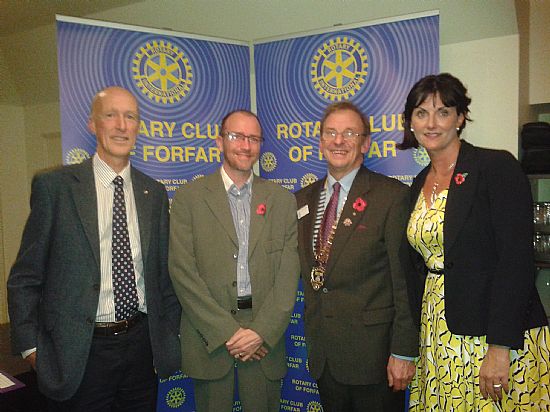