Forfar Rotary held a full programme at their weekly meeting when they had loads of guests and a visit from District Governor Keith Hopkins.

The occasion was to present cheques to the eleven clubs and organisations who helped during the Santa Sleigh Collection held during December. They all received £200 for their efforts and this was collected by a representative from each of the following groups :

Typical Comments from the representatives receiving the cheques were

“We would do it again next year”

“Santa told the kids to be naughty, hilarious”

“Sandy (Claus) Ogilvie deserves praise for his organisation of this event”

“More Fancy Dress and Fairydust for next year”.

Having had a meal earlier with the Rotary Club, the guests left before the meeting reconvened with Club President Alan Cairns welcoming District Governor Keith Hopkins and his wife Mary. District Governor Keith in addressing the the Forfar Rotary has this to say regarding the future of Rotary. Every club has its drains and radiators and no it was not a talk on plumbing but a reference to how some people are negative and therefore drain the enthusiasm of others and prevent the radiators who can generate and expand ventures from leaving or not even joining in the first place.

He encourages people be asked to join the World Wide Organisation of Rotary and so in concluding this report can we at Forfar Rotary invite would be Rotarians to step up and find out if Rotary is for them by coming to a few meetings etc. 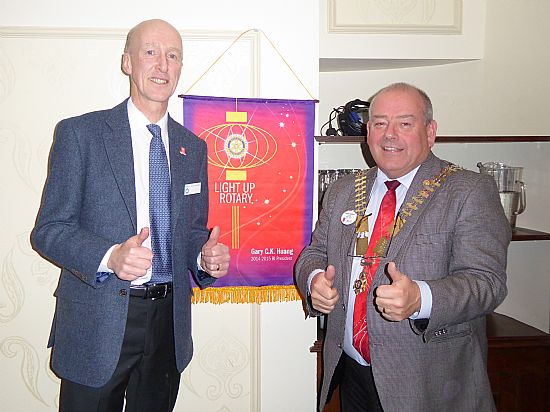 If you are interested please access our web site www.forfarrotary.org.uk , fill in the FEEDBACK form and we will be in contact. Remember Rotary is now dual gender and recent membership in the club has been very lucky with an influx of lady members who are very enthusiastic. So come on lads don't let the side down find out more and join us.