Forfar Rotary Club's Angus Marafun made a further contribution to the Ninewells Cancer Campaign when they donated £12000 to the charity at a presentation in the Canmore Room at the Forfar Municipal Building. Commenting on their achievement Lady Fiona Fraser said “this is a fantastic contribution from Forfar Rotary Club and takes the total money raised over the years to over £160,000. “As a group they have been our largest donor and we are grateful to them for all their hard work that makes their events such a success”.

David Valentine, the Marafun Convenor, reported the total donated was the culmination of so much hard work in the preparation for as well as the actual day of the event. In order that the net was cast further afield the name was this year branded as the Angus Marafun and brought on board more sponsorship from business's across the county. This was not all about the day of the event but also the months of preparation that go into organising such an event.

Major sponsor Mark Guild of Guild Homes speaking on behalf of the sponsors added that companies should also be proud of the part they play in supporting events where the proceeds can and will make a difference. Events like this raise the profile of Rotary as well as the town of Forfar.

Local Charities will also benefit, with a four figure amount also to be donated for use in the community as and when the Rotary Club are called upon for cash assistance. Rotary President Alan Cairns commented that it is important that money raised in the community was also put to good use in the local area as much of the support Forfar Rotary enjoys comes from the goodwill of the Forfar people.

A further boost to the funds is expected as the winners of the Top Sponsorship Prize generously decided to donate the award back to the Marafun. Alison Kydd, Lesley Cromar,Maggie Hoggan, Debbie Sussams and 80 year old Sam Connelly running as team “The Four Chicks and a Dude” had landed the prize of a stay in a 12 person luxury lodge kindly donated by Piperdam but thanks to the teams generosity it will be auctioned with the proceeds going to charity. 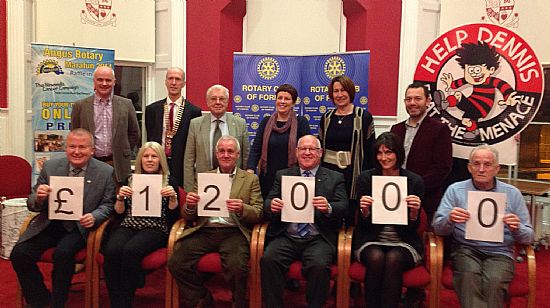 Forfar Rotary would like to thank all their sponsors, and volunteers for making the event yet another success in 2014.