This is the Section where editorial information relating to Marafun news stories can be viewed. This should give sponsors and contributors wider coverage and carry the message that Marafun is more than just one day every two years. Please use the index to check all the stories covered.

Eythan is a 7-year-old boy who was diagnosed with a condition called Spinal Muscular Atrophy (SMA) Type II in January 2007. Initially when Eythan was born he appeared to be a normal healthy baby boy. Eythan continued to grow and develop during the early months with his only apparent illness being a short chest infection. Around 6 months of age Eythan began to lag behind other babies his age in respect of weight gain and then physical ability. Doctors initially believed him to be slow in developing however as the year progressed it became apparent that Eythan was more ‘floppy’ than other children his age. He could not tolerate lying on his stomach and was unable to lift his head in the prone position. Eythan was around 11 months old when he was finally referred for further investigation and after extensive testing Eythan was diagnosed two days before his first birthday with Spinal Muscular Atrophy. 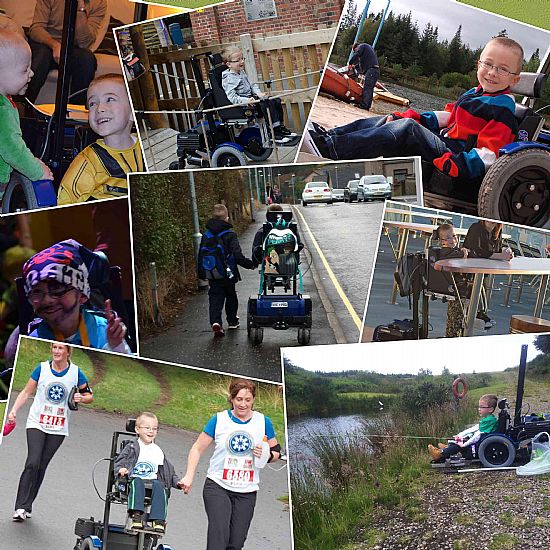 An individual with Spinal Muscular Atrophy has a missing or altered gene (SMN1). This gene produces a protein in the body called survival motor neuron protein. Motor neurons are nerve cells in the spinal cord which link with nerve fibres connected to muscles throughout the body. SMN protein is essential to the health of motor neurons. A deficiency of SMN protein causes the motor neuron nerve cells to shrink or atrophy and results in muscle weakness.

Spinal Muscular Atrophy affects muscles throughout the body, although often mainly the muscles closest to the trunk, such as shoulders, hip and back. Generally, weakness in the legs is greater than in the arms. Sometimes feeding and swallowing can be affected, as can the muscles involved in respiration for breathing and coughing. Children with Spinal Muscular Atrophy are at risk of feeding difficulties and poor growth. They are also at increased risk of pneumonia, other chest infections, gastro-oesophageal reflux and constipation. Muscle weakness causes physical disabilities and can be associated with scoliosis (curvature of the spine)

Children with SMA are usually bright and sociable individuals. Intellectual ability is normal, although physical difficulties may cause the child’s development to be delayed without careful assistance of specialist equipment and technology to ensure that each child reaches their full developmental potential.

There are 4 types of SMA, based upon achievement of certain physical milestones and age at diagnosis. Eythan best fits intermediate type, SMA Type II. Eythan has control of his head movements in an upright position, and can turn to either side. He is able to sit independently for short periods of time however he is liable to lose his balance and fall over and he is unable to correct himself. Eythan has good fine motor and manipulative skills, but has difficulty raising his arms above head level. It has often been said that SMA hurts parents and family more than the person who suffers from it.

Eythan requires a range of specialist equipment for seating, standing, bathing, toileting and sleeping in order to provide him with as much support as possible and prevent symptoms of any of the conditions described above. His ability to eat is at times compromised and he has PEG tube for us to use to boost his food intake as required. Eythan attends mainstream school and likes to be involved in everything his classmates do.

Eythan tries to be as independent as possible, he wants to go places and reach for things however his ability is hampered by his condition. Eythan uses a powerchair to get about and has done so, since the age of 2 when we became aware of a company called Dragonmobility based in Cambridge, UK. The owner of the company, Dan Everard is the Chief Designer and Engineer responsible for producing the Snapdragon and Dragon Powerchairs. Dan has spent his life evolving this range of revolutionary Powerchairs after his daughter Ruth was diagnosed with SMA at a similar age to Eythan. Ruth is now in her thirties and the General manager of Dragonmobility.

Unfortunately, due to the bespoke nature of the Snapdragon, the cost prohibits the NHS from funding and supplying the chair to children and adults in the UK. In 2007 we began fundraising to purchase a Snapdragon for Eythan. We were overwhelmed by the support we received and in August 2008 Eythan took deliver of “Snappy” his Snapdragon Powerchair and has never looked back. Without a shadow of a doubt it is the single best piece of equipment that we have been able to supply Eythan with to improve his quality of life.

The Snapdragon has been designed and engineered to promote independence in children and adults. It has a number of functions including an elevating seating system, which has allowed Eythan to explore and experience situations conventional Powerchairs can’t dream of replicating. Inclusion in day to day activities throughout nursery, pre school and school, including sitting on the floor during story time, being able to pick toys up from the floor and generally interacting with his friends at their height. It has meant that as a family we have been able to do simple things often taken for granted like going out for a family meal without having to worry about table heights and accessibility.

In addition to the elevating seat we purchased a bespoke standing frame that allows Eythan to stand and move around whilst being able to elevate himself to access cupboards and shelves. The Dragonmobility range of chairs are the only chairs currently available that allow the user the flexibility to sit on the floor or elevate to table height and beyond, as well as standing.

As with any piece of machinery the chair has a life span and when purchased it came with a 5yr service contract. Eythan uses ‘Snappy’ 12 hrs a day, 365 days a year and as a result of the chairs amazing capabilities this means that Eythan enjoys taking Snappy to its limits and beyond! Having spoken with Dan and the team at Dragonmobility we realise that this chair is reaching the end of its serviceable life and we need to consider Eythan’s future mobility requirements. We are in absolutely no doubt that this amazing chair has helped mould our son into the confident, outgoing and fun loving little boy that he is today. We could not begin to imagine life without Snappy and we are in no doubt that we need to do everything we can as parents to ensure our son gets the opportunity to fulfil his full potential despite his disability. Life in a Snapdragon allows Eythan maximum freedom and flexibility and more than any other powerchair on the market today.

That freedom comes at a price, due to the unique nature of the chair. A new Snapdragon with 5-year service contract and yearly chair builds as Eythan continues to grow is £18,000. This is a huge amount of money, however it is impossible to put a price on the level of mobility it affords Eythan.

As a family we now have the mammoth task of raising funds to keep Eythan in a Snapdragon. The purpose of this letter is to try and convey how much this means to our son and to us as a family. We spent a few hours looking back through family pictures taken over the past two years and one thing that became clear during this was the constant, genuine smile on Eythan’s face. Eythan has had some absolutely fantastic experiences in his Snapdragon and we sincerely hope we can, with the generosity and help of others, make sure he continues to grow and develop into a confident and happy teenager exploring the world in a Snapdragon, where he is seen as uniquely abled rather than disabled.

Thank you for taking the time to read our letter. We would be extremely grateful if you would be in a position to help us realise our goal and if you need any further information we would be happy to discuss it further. We can be contacted on email ryan.galloway@sky.com or by telephone 01307 468960 or mobile 07411570723.

Please note that whenever you submit something which may be publicly shown on a website you should take care not to make any statements which could be considered defamatory to any person or organisation.
Back to Top
site map | cookie policy | privacy policy | accessibility statement