A Valentine to China.

Forfar Rotarian David Valentine presented a Banner and a gift from the Rotary Club of West Shanghai to Forfar President Jim McCluskey. 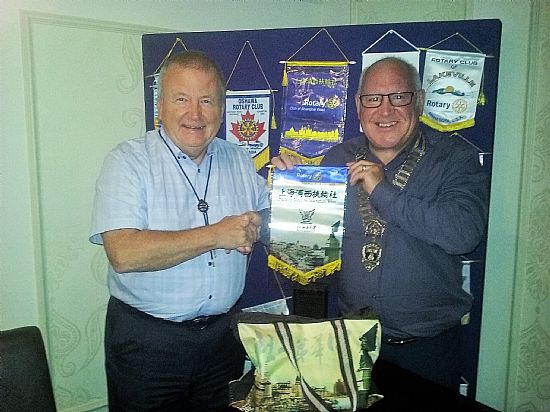 I first visited the club in November last year at the invitation of Jack Huang the General manager of Qizong Golf Club in Shanghai. I've known Jack around 16 years and he's brought Chinese golfers to Angus on several occasions. This was the first Mandarin speaking rotary club in China albeit there are no mainland Chinese members who are mostly from Taiwan, Singapore, Malaysia etc..

I have four good friends who are members. As well as Jack (known as "Golf"  there is Charles Soong (known as Whisky" -  the boss of Macallan whisky in the Far East (based in Shanghai), My  business partner - Tiffany Storey (Taiwanese) - she was christened Tiffany and doesnt have another handle.....  and Lynna who is otherwise known as "Coffee" because she has a coffee import business based in Indonesia..

They gave me a banner which I presented to the club in November but this time they presented me with a new one bearing their new logo which is the "Angel of peace". A war memorial was erected on the bund in Shanghai in 1924 to commemorate those who fought in the first "European War". It was demolished in 1960 to make way for some improvements to the Bund (along the river Po. They have now adopted the Angel as a symbol of their rotary club based on "Peace".

The photos show jack Huang with his rotary "Golf" badge

Also shows me exchanging a Forfar banner for a new Shanghai West banner with the new logo......