Good News for the Poor.

President Bill Reid welcomed our speaker for the night Kevin Simpson who gave a very good talk about Malawi Fruits and also welcomed a visiting Rotarian Peter Butler from Lincolnshire who was in town staying at the Forfar Caravan Site. He enjoyed the company and presented a banner from his home club.

Malawi is the fourth most impoverished country in the world but changes are improving things albeit slowly. Malawi Fruits are focussing on irrigation and this is being done to now grow two crops per season. Ultimately this now gives the farmers money from the second crop, something never achieved in the past.

The irrigation provides water by the use of a solar powered pump aptly called a “Future Pump” allowing the dry conditions at the end of summer to produce the second crop. The growing of Paprika now provides an income which has major benefits.

1 Their children go to secondary school because there is money for their fees.

The vote of thanks was by Rotarian Tim Hale who in his role will be Convenor of the International Committee for the next Rotary year has pledged that they will raise £500 to purchase a Future Pump. 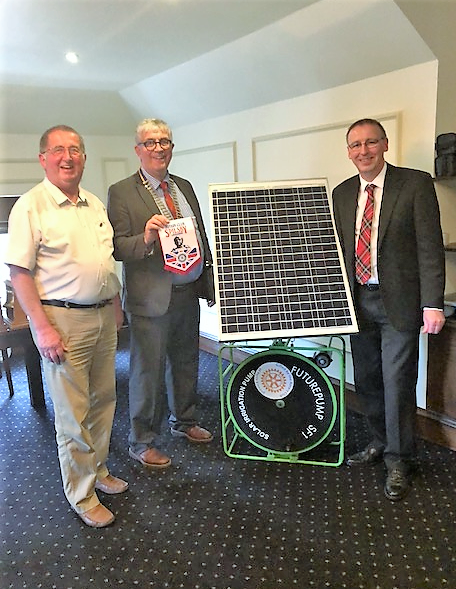