Forfar Rotary are Fans of FAN.

Forfar Rotary Club President Bill Reid welcomed Tom O’Brian to their meeting this week when he attended to talk about Forfar Action Network.

Tom gave an informative talk regarding what has been achieved so far since they picked up some of the challenges to create a better environment for the Town and its citizens. The first major achievement was the Forfar Gala week which without their enthusiastic input would just not have happened.

The need to create an atmosphere for the Christmas Season was supported by the group to raise awareness of the constant need to fund raise not just for last years “Christmas Lights at the Cross” but the ongoing need to further enhance and replace lights year after year. Local businesses again put their hands in their pockets to support this initiative with not only cash but work carried out at a price that would not be considered a commercial proposition.

Forfar Rotary will continue to support the Switch on of the Lights and bring Santa to the Cross as well as its Santa Tour of the Town which in its self is a huge commitment but one that brings Christmas alive for the youngsters of the Town.

Tom told the assembled company of FANs aspirations for this year and hope to get the Crazy Golf at the Lochside brought back to a usable state as well as the Pitch and Putt. They are also looking at a Public Toilet to be sited there as well, something that will enhance the usage and keep bringing people to the town. The ideas are there, the enthusiasm is there, but like every thing in life it will be at a cost.

Forfar Rotary presented Tom with a cheque and wish the enterprise shown by Forfar Action Network continued success as they grapple with the many issues that were in the past undertaken by town councils.

Rotarian Katharine McLean proposed the Vote of Thanks and in so doing highlighted the need for the public to further invest to keep Forfar a town to be proud of. She asked for a hearty round of applause which was given with enthusiasm by the Rotarians. 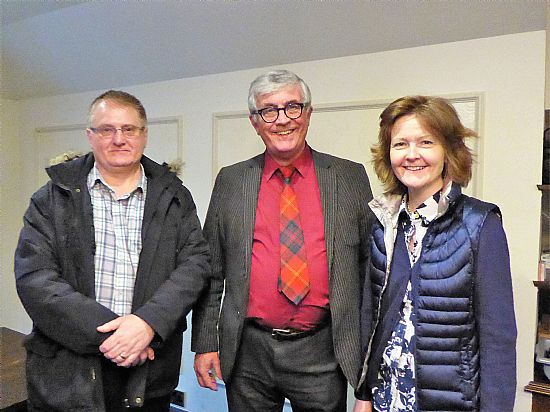