This week at Forfar Rotary was a special night for those groups who supported the “Santa Sleigh” in the weeks before Christmas. As in the past they were represented by a nominated person who attended on behalf of each organisation. The task involved the calling on households to ask for a donation for Forfar Rotary to allow them to carry out its charity work. Such an undertaking to carry out this project could not be done without outside help and so Forfar Rotary are fully aware of the importance of their participation.

President Bill Reid thanked everyone but paid special reference to Rotarian Sandy Ogilvie for once more holding the event together and being out every night. Sandy will be a hard act to follow but has given sterling service since Rotary took over from Round Table. President Bill said occasions such as these are important to the whole community and it spreads the money collected from the Forfar Public letting them know of where their money goes. He gave a commitment that the event will continue and as a result of the generous giving from the Forfar citizens more money will be donated towards maintaining a festive feel to the town in cooperation with Forfar Action Network. More details of further donations will be given in the coming months.

Tony Walker thanked the Forfar Rotary Club on behalf of the recipients for the cash input received, commenting on the good relationship and good fun that the event provided whilst giving a financial boost which was much appreciated. 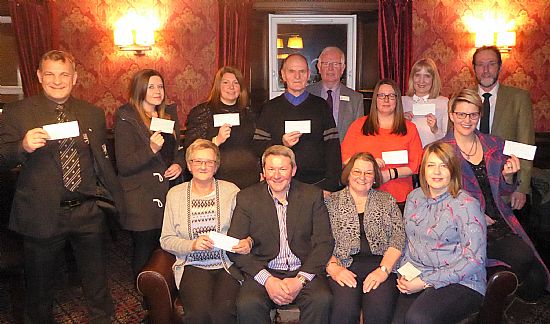 Also in the photo, seated in the middle were Adrian and Mary White, son and wife of the late Alan White a much missed Past President of Forfar Rotary. In recognition of his contribution to the club over many years it was decided that the Technology Prize given annually to a Forfar Academy pupil would now be known as the Alan White Trophy a decision endorsed by all the club members.