Paula reported, myself and Gordon Peterkin where the hosts from our club and my family were Geoff and Lorraine Horsley with their children Matthew & Hannah from Willetton, Western Australia
Geoff joined Rotary in 1993 and has served as President three times and has also been an Assistant District Governor. Geoff is Deputy Chief Pilot of the Royal Flying Doctor Service in Western Australia. Geoff has played in two IFCR World Festivals of Cricket in Australia in 2004 and Sri Lanka in 2007. Lorraine has been a Rotarian for 20 years and has also served as President of her Club.
Lorraine is an Australian Broadcasting Corporation (ABC) radio producer and host and a University lecturer.
Their 3 children Christian, Matthew and Hannah have grown up with Rotary and joined their parents in many Rotary projects. Like their parents and Grandparents they are all Paul Harris fellows. 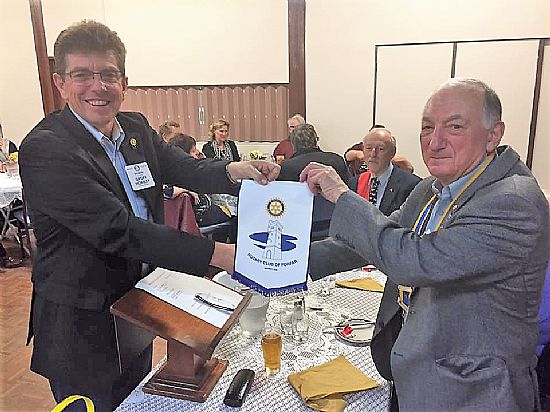 Presenting the banner from the Rotary Club of Forfar and telling the club just how well our hosts looked after us. Thank you Paula and Alastair for having us.

A New Addition to the ClubA Caring Club