This week the Forfar Rotary was subjest to change when President Paula ended her very successful year in office by handing over the Presidents Chain to the New incumbent, the new 2017/18 President Bill Reid.

In her closing remarks she thanked the Rotarians for making her year in office as a very special time and in particular her Rotary Council Convenors for their hard work and support.

She then handed over the rest of the meeting to President Bill who paid tribute to Paula for her leadership and commitment throughout the year, wishing her continued success in business and handing over a bouquet of flowers to great applause by the Rotarians. Bill then thanked the new President Elect Jim McCluskey for accepting the role and gave him his Chain of Office. 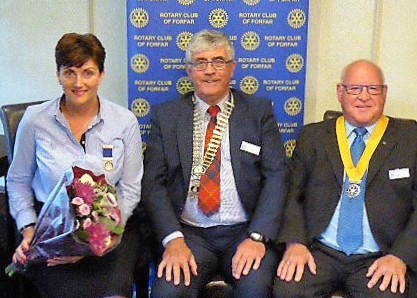 The Club are sure that the good work of Forfar Rotary will be in safe hands under the new leadership og President Bill Reid.