Partners Night and farewell to Marafun 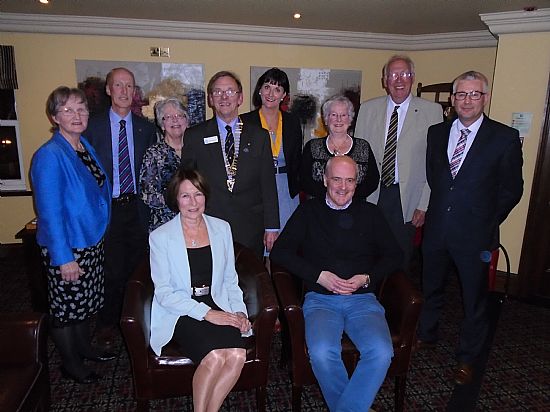 At Forfar Rotary Club's annual Partners Night, President Robin Wardhaugh welcomed everyone and in particuler President Jean Hale of Inner Wheel. He also gave a special mention of welcome to Lady Fiona Fraser and to Mark Guild of Guild Homes.

It has been decided to cease running the Marafun for various reasons and although it brought much success from its inception when under the stewardship of Jim Nicoll, Tim Hale and David Valentine it was felt that it “had run its course” with falling sponsership from the declining numbers of participants.

The main sponsor over the years was provided by the generousity of Mark Guild of Guild Homes and his presence at the meeting was a small way of paying tribute to his magnificent support.

Lady Fiona Fraser paid tribute to the Forfar Rotary Club for their fund raising efforts through Marafun which over the years has donated in the region of £200.000 to the Dundee based Cancer Campaign. This is now known as the Jacqui Wood Centre named after a wonderful campaigner for the charity who became a friend of Forfar Rotary and who sadly passed away in 2001 still fighting cancer to the end.

President Robin thanked Fiona and Mark for attending so that the club could show their gratitude for their invaluable contribution to the work of Forfar Rotary.