What do you do in a triathlon when you get a puncture after 5K in a 40K cycling section. That was the situation that took place when Andrew Woodroffe took part in a triathlon in Canada this year. Well you keep on cycling on the wheel rim until you dismount and run the next stage.

Forfar Rotary Club members were astounded at the determination of this ex Forfar Academy pupil who not only completed the event, but gained places in the running section. In Andrew's own words after the cycling and going into transition for the running “ There were a few guys in my age group who I set out to catch and I dually did so which made me feel slightly better. But crossing the line I was gutted, I had finished 40th so still beat over 20 people. But that didn't matter, I knew I was better than the results sheet showed and I knew I could have had such a stronger race”.

With this kind of dedication the general concensus within the Rotary Club was that here is a young man to watch out for and although he has already represented Scotland and team GB in his age group he will surely progess and hopefully extend his career next season.

Andrew was introduced by Rotarian Ian Findlay and vote of thanks was given by Danny Bell. 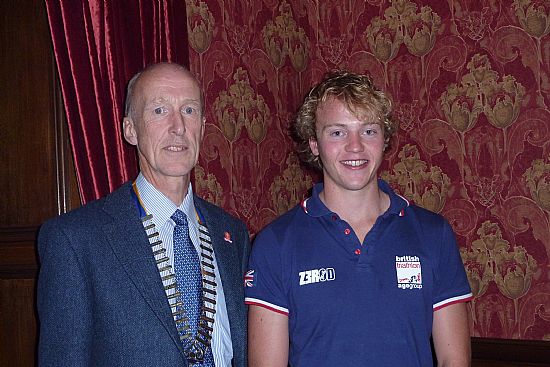 President Alan Cairns then closed the meeting and was delighted to have a further chat with Andrew, congratulating him on a well delivered talk.