Rotary clubs throughout District 1010 have been flying into action to help fund Scotland’s Charity Air Ambulance. From The Shetlands to the Western Isles and south to the Firth of Forth, fundraisers have put charity giving into gear in response to a nationwide appeal to help fund the country’s first and only charity-funded frontline emergency helicopter air ambulance.

Gavin Davey, chief executive of SCAA, was a keynote speaker at the Rotary District 1010 Conference at Aviemore last November and his presentation on the work of the Perth Airport-based service cemented the cause in the heart of Rotarians everywhere.

By the end of April, 25 clubs in 1010 had donated over £25,250. Fundraising fun ranged from musical evenings to charity auctions. More than 17 clubs have already entertained a guest speaker from SCAA at their weekly meeting with a further three appointments pending.

And this week SCAA thanked Rotarians throughout Scotland by flying a new supporters’ logo on the aircraft when they unveiled the internationally recognised Rotary wheel logo on their livery.

“We have been tremendously well supported by Rotary all over Scotland,” said Mr Davey. “Not only have clubs raised and donated funds, but Rotarians have also used their network to spread word of SCAA both within and outwith their organisation. We owe Rotary a great debt of gratitude and SCAA is proud to fly the Rotary emblem on all our missions, bringing emergency medical aid and relief to those most in need - as Rotarians have been doing throughout the world for over a century.”

Rotary District Governor Jim Houston expressed his thanks and delight at the honour.

“We never expected recognition of this kind and we’re absolutely thrilled and honoured to have our name associated with Scotland’s only charity-funded air ambulance,” he said. “All Rotary clubs exist to support and benefit their communities, both locally and internationally and many clubs in the East and North of Scotland have enthusiastically supported the efforts of Scotland’s Charity Air Ambulance to provide a vital lifeline to the sick and injured across Scotland. Rotary International is proud and honoured to be recognised by SCAA for our contribution to this emergency service.” 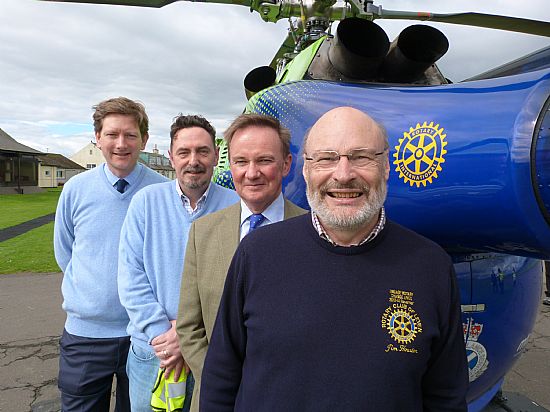 Mr Davey continued: “Rotary and Scotland’s Charity Air Ambulance have many common aims and principles, highlighting Rotary’s ‘ We’re For Communities’ message. Above all is the shared sense of service to the community, whether that is local or national, or even international in the case of Rotary. We are both making a clear and measurable difference to people’s lives.”

SCAA has responded to nearly 300 emergency callouts since launching last year. And with a £1.5 million annual budget, Mr Davey stressed the continuing need for fundraising.

“Raising funds to sustain this vital life-saving service may seem like a daunting task,” he said. “But if everyone in Scotland donated just £1 we would have enough to keep the helicopter and crew flying their life-saving missions for the next three years. Rotary in Scotland is helping to spread that vital message and sustain this key service and we’re proud to fly the organisations’ logo in return.”