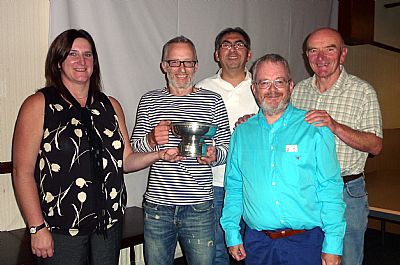 
Forfar Rotary Club ran the annual Ally Roebuck Memorial Quiz this week, which was held in the Plough Inn who helped make it a successful night. Local rivalry was ensured with teams entered by the Courier and the Forfar Dispatch. We wont say who hold the bragging rights but lets just say it was not the Courier team. There was good competition to try and beat the current holders of the trophy “The Nearly Men” and they were behind on the night up to the finishing straight before running out eventual winners. The runners up were the team “Not Directory Enquiries” from the Forfar Dispatch with third place going to “Kenny’s Heros” The booby prize went to “4 Non Blondes” narrowly beating a Rotary team for the honour.
There were 13 teams entered and between the entry fee and a well supported raffle the sum of £427 was raised. The money is going into the general community fund at present, and as this was run by the Community Service committee it will be spent locally for the good of the Forfar public.
Thanks to all for their support and if you think you would like to enter a team next year contact Forfar Rotary via the website or Facebook.