Forfar Rotary President Scott introduced Rotarian James Gray-Cheape who, as a fairly new recruit to the club, has a duty to fulfil by giving a vocational talk. James’s choice was to give gave a talk on his experience of living and working in Romania. James headed east in 1996 to Romania where he established a courier business called Pegasus.

He explained how his first employees had been orphans and how he had had to keep this aspect under wraps to ensure that local perceptions of orphans being wild and unruly, did not prevent the business from developing. When this was eventually released it was widely celebrated including being featured in the Financial Times. He went on to described how he built the business over coming considerable challenges during the 12 year period. He and his team developed a national and international parcel distribution network which they then sold to DPD (La Poste - The French Post Office). He also talked through the specialist shipping projects that he under takes today in Romania and around the world involving time critical and temperature sensitive cargoes.

James also gave the assembled company some aperitifs and digestifs from Romania which were greatly appreciated by all.

Vote of thanks was given by Rotarian Major Jim McCluskey who gave an extremely congratulatory vote of thanks, praising James for the use of his business skills to empower and enable those less fortunate to flourish. 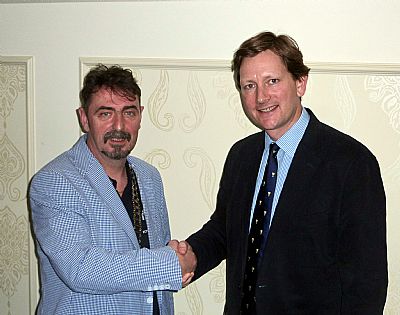