The Rotary Club of Forfar presented fellow Rotarian Alan White with a Paul Harris Award at the meeting on Wednesday, 5th June. Fellow member David Arnot gave a brief history of Alan's involvement in the Club since he joined in 1986. Alan is an active member and was President in 2000-2001 and has represented the Club many times in curling competitions, both here and abroad. 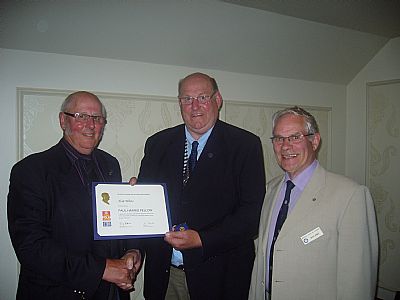 Paul Harris is known for founding Rotary International in Chicago in 1905. Rotary has developed and now has well over one million members worldwide who volunteer and give their time to many worthwhile projects. The Paul Harris Fellow Award is made at the discretion of the Club and it is an honour given to individuals who meet high professional and personal standards. Forfar Members have given Alan his award for services not only to the Forfar Club but also for his involvement with the Forfarian Community Bus and the community at large.