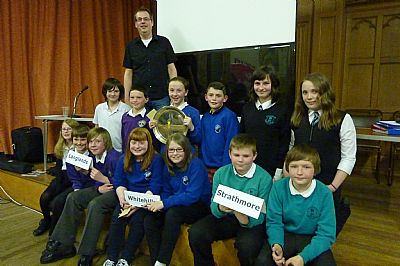 Convenor Andy McGlynn welcomed the Teams and their supporters as well as introducing Quizmaster Graeme Waggott to the Primary School Quiz run bt the Rotary Club of Forfar.

With ten rounds of questions to get through, Graeme Waggott kept the competition going at a good pace and testing the competitors to the full.

The teams were representing Langlands, Whitehills and Strathnore Primary Schools and it proved to be a very close run thing with Whitehills trying to repeat the success of last year and retain the trophy. With everything to play for going into the last round it was a winning margin of only three points that saw Whitehills retaining the trophy. They will now go forward to compete in the zone round of the competition.

President Elect Scott Ballantyne thanked everyone for their assistance in the smooth running of the evening and presented the prizes. Andy McGlynn pain tribute to Gavin Drummond for setting the quiz and thanked Graeme Waggott for once again giving up his time and gave him a small token of appreciation. 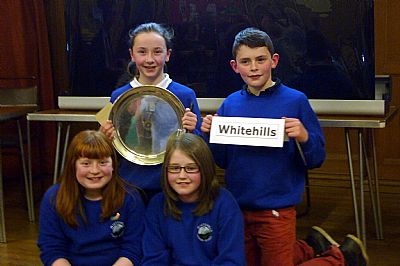 Photo’s  of the winners and at the top, all the teams with Graeme Waggott