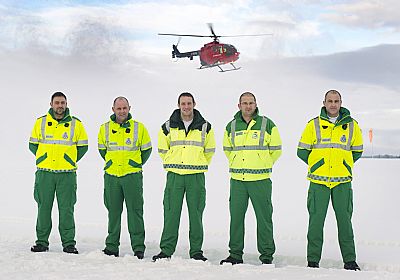 Forfar Rotary Club had the pleasure of listening to its newest member when James Gray-Cheape gave a talk on his new ambassadorial role for S.C.A.A. It is hoped that Rotary in Scotland as well as the general public will soon get to know this stands for Scotland's Charity Air Ambulance. SCAA's helicopter will serve all of Scotland and its islands and is a genuine national resource. The key priority is that it can quickly reach most remote areas of the country and its central location in Perth achieves that. The Golden Hour is most important in the treatment of casualties and this critical time frame of the first 60 minutes can only be achieved by air ambulance rather than by road. The chances of a successful outcome are greatly enhanced if medics can get to patients and work with them in their recovery at the earliest opportunity. Imagine the difference if say an emergency situation arose in Glenshee and needed to be treated in Ninewells Hospital, Dundee. The time difference by road is well outside the Golden Hour but well inside it if an air ambulance is available. The charity helicopter will be crewed by two  Scottish Ambulance Service air ambulance paramedics. President Tim Hale was able to confirm the Forfar Club is to donate £500 to  the Perth Airport-based Scotland’s Charity Air Ambulance – a new charity that aims to launch the country’s first charity funded helicopter air ambulance. James and some friends are to do the Three Peaks Challenge this year to raise funds and we wish him well with that, its quite a serious bit of walking as some Forfar Rotarians know from personal experience.