The terrible disaster in Beirut has galvanised the 89 Rotary Clubs in Rotary District 1010 into action.

There are over 2,400 Rotarians in our District, which stretches from Shetland to the Firth of Forth, and from Stornoway to Aberdeen.

Within days of the disaster the District Governor and his colleagues had been in touch with Beirut Cedars Rotary Club and established need.

The District’s management team - all Rotarian volunteers - decided that there should be an immediate fundraising appeal to all clubs, and that the money raised would go direct to Ron Farra, the President elect at the Beirut Cedars Club.

This is established practice in Rotary.  When funds are raised, they go to Rotarians in Rotary Clubs in the affected areas; they are trustworthy and they are all volunteers, so we know that 100% of the funds raised goes directly to help those affected.  The money is not being filtered through aid organisations with overheads and expenses, and we know that in Beirut it is being put to use within two days of being received.

The District Treasurer established the financial arrangements; transfer in USD and made a personal donation to ensure that the systems worked.  The District team decided that the appeal would go to clubs though our monthly newsletter, 1010Vision, and the appeal was front page in the August 2020 edition, published on 15th August.

The appeal was deliberately time limited to 31st August to get clubs moving!

Within days of the appeal launch the treasurer was able to send USD 5,000 to the Beirut Cedars Club; by 25th August another USD 6,100 was on its way, and by the closing date of the appeal we hope over USD 14,000 will have been sent to where it is most needed. Some clubs had made a personal appeal to members, others had raided the reserves in their charitable trust funds, and some made a local public appeal, and everyone had been most generous.

The copy of 1010Vision with the appeal can be accessed on the Rotary District 1010 website, together with our promotional magazine, ROTARYFirst, which shows the great variety of service projects we, as Rotarians carry out in North Scotland. 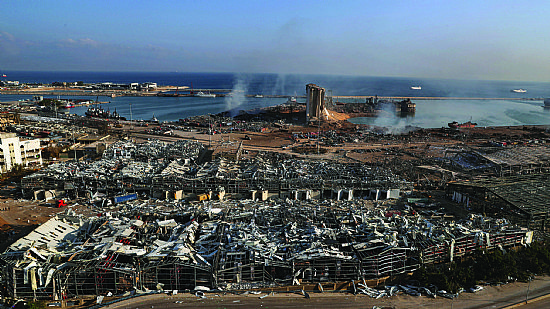 A New MemberA Good Friday for the ClubSpring into Action