Completing a busy night’s schedule for Forfar Rotary was the eagerly anticipated running of the Annual School Quiz following on from an earlier meeting at the Club where cheques were presented to those who assisted with the Santa Sleigh.

Five Schools participated in this years quiz which was keenly contested by the teams with ten rounds of questions. Rotarian Scotty Ballantyne was Question Master and the scrutiny of answers was done by a Rotarian at each teams table. The details were then recorded and adjudged by Rotarians Tim Hale and Gordon Peterkin.

The large turnout of parents and other family supporters greatly added to the occasion with updates on the score from time to time adding to the excitement. It was a closely run thing as the teams at the top were only separated by one or two questions. Although the teams were mainly from primary seven, Tealing with only primary five pupils were due a lot of respect for their high standard for such a young team.
However there could only be one winner and by a margin of possibly one question the winning team was Langlands Primary.

The winners in a close contest were rewarded for their effort and each received an Amazon Gift Token. They will now go forward to the next round of the competition. 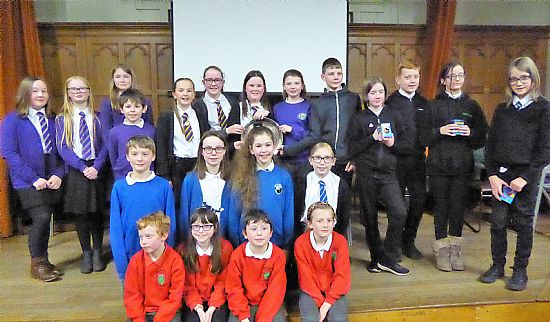